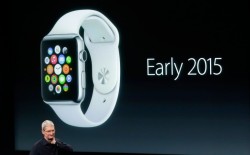 2014 saw tremendous growth in the mobile gaming world, and this year’s continued expansion brings with it exciting opportunities and new challenges for developers. The mobile games industry is projected to top $40 billion by 2017, and today’s market trends can offer an insightful window into where the future is headed. With 2015 already off to a wild start, here’s a quick breakdown of emerging trends in the market this year and what you can expect.

1. Apple Watch is changing the game for games.
Mobile game studios are among the hundreds of developers currently working with Apple to create apps for its upcoming Apple Watch. With Apple pushing this slick new tech, we can expect to see some interesting and unusual games coming out of the pipeline this year as it gains momentum. Specific official Apple Watch game announcements are scarce at the moment, though this should pick up as it moves closer to launch. Letterpad is one of the first gaming examples for the device we’ve seen, as is the cute Tamagotchi-like game Hatchi, which will be getting an Apple Watch update in the near future.

2. Freemium is still overwhelmingly popular among players.
In 2014, popular freemium game Clash of Clans was the year’s highest grossing app on iOS, and free-to-play games dominate the popular new offerings on the App store each week. As such, more studios will continue to rely on alternative ways to monetize their games through IAPs, ads, and video.

3. Bigger games may be on the way.
With Apple recently upping its app binary size allowances from 2 GB to 4 GB, expect to see some bigger, flashier games on the horizon. It’s possible, too, that we’ll see an increase in storage on the hardware front as well.

4. Social integration is becoming even more important.
Forming deeper user connections and engaging players on a more personal level is a major focus for developers. More studios are integrating social media into their actual game play, in some cases tying it into unlocks and freemium applications, to harness the power of social interaction with their audience.

5. Game studios are moonlighting as mobile publishers.
Some popular studios, like Rovio, have expanded beyond creating their own games to serving as a mobile publisher of sorts for other smaller game companies. It’s an interesting, and not altogether unexpected move, that lets newcomers with promising projects tap into existing audience. And, as mobile grows globally, more publishers with a unique understanding of Asian marketers, like Hong Kong-based 6waves, will help developers localize their games.

6. Games are still dominating mobile marketplaces.
Mobile games are big business these days, and that’s expected to continue well beyond 2015. Last year, games accounted for a whopping 84.9 of the 700 top grossing apps on the App Store and Google Play. That deluge of new gaming content isn’t expected to slow anytime soon.