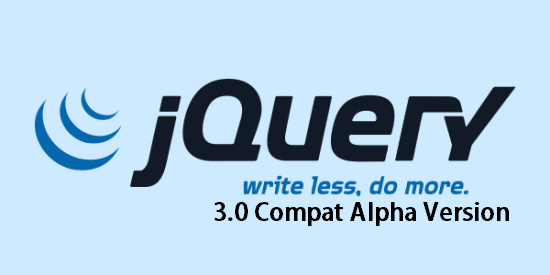 The newest release of jQuery will follow the best practices of what is called “Compat”. A new major number indicates that there is a breaking change in the API and developers need to be aware that this could break their code.

In previous versions, the jQuery team indicated browser support using the version number. The release of jQuery Compat 3.0 version, will start from a clean sheet, although there will still be two versions:

A big jump in version numbering will not lead to big migration issues however – developers will be relieved to hear that the majority of the current jQuery code will still work. With the version change the jQuery development team will meet the semantic versioning standards, so the changed or deprecated methods will be detected by a new version of the jQuery Migrate plug-in.
The new release of jQuery is not a major rework of the API like that announced by Angular for example. The design doesn’t actually need a lot of changes but simply some optimizations. The two principal changes we already know about are Promise/compatibility for Deferred Implementation and the return of requestAnimationFrame for animations in order to improve performance and the end of support for the Internet Explorer 6 and 7 browsers. The most important aspect of the new release will be the streamlining of versioning.

If your web application is built for the leading edge browsers, or is an HTML based application contained in a web view (like Phone Gap or Cordova) where you know which browser engines are in use, the jQuery 3.0 package will be most suitable for you.

jQuery is offering an upgrade to their coding language that will allow users to incorporate previous versions and flexibly respond to changes in web design. Here at WebClues Infotech, we’re looking forward to seeing how these changes will be adopted by the development community.