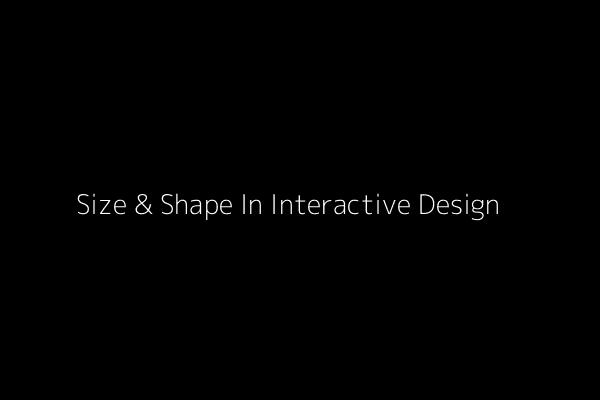 We can describe Fitts’s Law as:

“…a model of human movement in HCI and ergonomics which predicts that the time required to rapidly move to a target area is a function of the distance to and the size of the target.”

As interaction designer Anastasios Karafillis points out, Fitts’s Law must be executed with subtlety. Interaction design is meant for people, which means that you need consistency, enjoyment, accessibility, and discover-ability — none of which can just be calculated with clicks or pixels.

Minimize Physical Exertion
Fitts’s Law originated as a way to analyze physical exertion, and it wasn’t until later that his principles were reinterpreted to apply to web design. However, with their physical gesturing, mobile devices are actually more attuned to what Fitts was actually studying. Whether you interpret his studies loosely for web design or literally for mobile design, in both cases, Fitts’s Law states that less exertion leads to a better UX.

Mobile design has a lot more muscle and fatigue concerns than web design, so it’s important to keep them in mind to completely optimize your UX. Justin Smith, UX Architect for Cartoon Network, explains that the problem is further complicated by the different screen sizes each having their own different issues. But if you’ve been paying attention to the points of Fitts’s Law, you’ll have no problem applying them to the muscle movements of mobile devices.

Smaller screens tend to put more strain on the hand muscles, but 7” devices, while bigger and heavier, are easier to manipulate. One point to keep in mind with 7” screens is that, in the vertical orientation, most people will hold it at the the top. This makes the top two corners the best places for actionable targets.

For example, when you want to remove a field in the relationship management tool Relate-IQ, the modal window actually prompts you to type in “DELETE THIS FIELD”. From our experience with the tool, this dramatically decreases the likelihood of deleting due to the effort required.

Take Deviant Art’s favoriting method: if a user clicks on a picture and drags slightly, the Favorite toolbar drops down on screen, allowing the user to simply “drop” the picture in. While most other sites have clickable options for their Favoriting system, the advantage to this one is that it hides the controls interface until needed, saving valuable screen real estate on a site that relies heavily on displaying as many graphics as possible.

Create Generous Clicking Space
The loosest interpretation of Fitts’s Law is to make your key elements larger so that it’s easier for your users to click them. As we discussed in the free e-book Interaction Design Best Practices Vol. 1, this is mostly an oversimplification.

There are at least two universal truths an interaction designer can take from this:

Drawbacks to relying on excessive size

When determining size, it’s important to remember that increasing a button’s size does not increase its usability linearly.